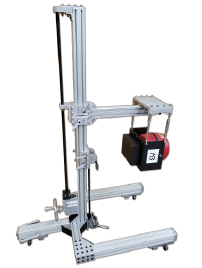 The Lateral Excitation Stand from MB Dynamics provides a versatile means of suspending and supporting MB MODAL 50 and MODAL 110 exciters during experimental modal surveys. The stand applies either horizontal forces into the side of a test structure, or oblique forces from underneath a structure. Piano wire stingers or compression stingers may also be used. The exciter can be suspended with four turnbuckles, as shown in the illustration to the right. When suspended, the piano wire connects to the test item’s force sensor. It then passes through the MB exciter through-hole and its corresponding base, as well as its bolt-on inertial masses (when used to add inertia). The piano wire then wraps around a pulley and is tensioned using a small hand winch. After applying the static force which exceeds the dynamic force, the Dumore Chuck within the exciter moving element is tightened to secure the piano wire.

This stinger reduces force measurement errors, given that the tension-only stinger applies only axial forces, without side loads contaminating force data. The exciter can also set on top of the lateral arm and be rotated in its trunnion base to provide excitation at any angle.